Are you or your client one among those who is affected with the collapse of Carillion? 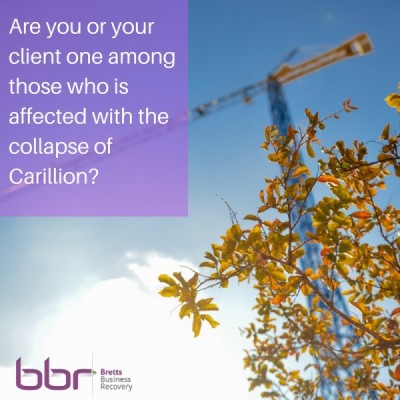 Carillion was managing hundreds of public/private projects in the transport, health, education, defence and construction sectors. Being the second largest construction company in the UK, the unexpected collapse of Carillion shall give raise to concerns about the solvency of its dependent suppliers and contractors (“collectively called sub-contractors”). As these sub-contractors were part of a big chain, survival of one business largely depends of the survival of another. The collapse of Carillion will undoubtedly affect the business of others lower in the chain and increase their risk of insolvency.  Although the government is putting in place contingent plans to minimise the knock-on effect, the collapse of Carillion shall trigger the insolvency of many companies in this country and abroad alike.

The exact reasons for the collapse of Carillion is not yet known, but based on current information, it appears that the Company was managing nearly 450 contracts and won most of the big projects, in a bidding war, at less profit margin.  To manage the cashflow, the Company delayed payments to its suppliers which in turn delayed the completion of its major projects, due to late supplies and other management issues. The delayed projects cost the Company heavily and affected its working capital.  The projects with less profit margin became loss making and although the company had profit warnings, it appears that the management had not taken substantial measures to restructure the business. The Company also continued to pay bonuses and probably unlawful dividends to investors when it didn’t have enough funds to pay its accrued pension deficit. The appointed liquidator shall investigate on these possible illegal dividends and the company investors must repay such dividends to the company, if proven.

If you are suffering any of the above difficulties and worried that your company is unable to avoid an insolvent situation, you should seek early advice from an insolvency/turnaround specialist. As a director, if you allow the financial position to worsen, you be charged for wrongful trading and in most instances, become personally liable for the accrued debts since the onset of the company’s insolvency.

At this early stage it is not known how much the creditors of Carillion will get out of its liquidation estate, by way of a dividend, and how long they will have to wait to get such dividends. If the suppliers and sub-contractors do not have enough liquid assets and are unable to secure additional funding to manage their short term financial needs, they may face with insolvency situation.

We have assisted many construction companies to re-structure and rescue their businesses.  We can enter into early negotiation with the key stakeholders on behalf of the company. If no agreement can be achieved we can assist the directors in placing the company into formal insolvency proceedings.

Please call us for free and confidential advice from one of our professional advisers on 01474 532862 or email to isobelbrett@brettsbr.co.uk or rijimon@brettsbr.co.uk. We may be able to limit your personal risk and liability and help rescue/restructure your business.