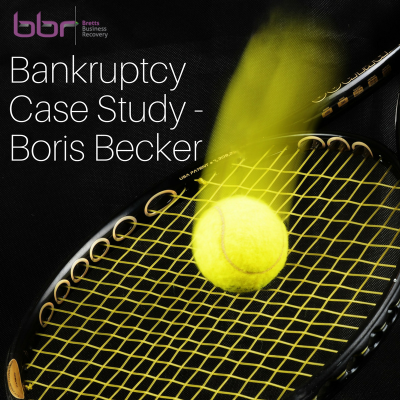 Once made bankrupt, the Official Receiver becomes the Trustee to deal with the bankruptcy estate. All of your assets vest with the Trustee in the bankruptcy. Although Mr Becker claims that he has means to repay the debt, the bankruptcy shall undoubtedly tarnish his image.  Moreover, as a bankrupt, you are unable to hold certain positions such as being a director of a company, an accountant, a lawyer etc for certain period. Your name will be in the Individual Insolvency Register (which is a public record) for at least 1 year. This period could be extended if your automatic discharge is challenged by the Trustee or the Official Receiver because you have acted dishonestly and or irresponsibly. Your insurance premiums on motor vehicles, houses etc may increase. You may struggle to open up a bank account in your name. It will also have serious consequence on your partnership ventures, which could be automatically dissolved following your bankruptcy. In self-employment, you are unable to use a business name which is different to the one you have used prior to your bankruptcy (exemption apply).

In Mr Becker’s case, he disputes the debt owed to the private banker for unknown reasons. It appears that Mr Becker failed to prove his allegations and a judgement was previously ordered against him. If Mr Becker still believes that the debt against him is challengeable, he has the option to bring this matter to the attention of the Trustee together with any supporting documentation. The Trustee will investigate the allegations and may admit the claim in part or in full, as appropriate. If the creditors claim is rejected in full or in part it should be notified to the creditor who will have 21 days to appeal such a decision of the Trustee.

The Trustee will realise the assets in the bankruptcy estate and distribute the estate funds to the creditors with agreed claims, after meeting the costs of the bankruptcy. The costs would normally include the official receiver’s standard general fees of £6,000 (if the bankruptcy order was made on or after 21 July 2016), Bankruptcy Administration fees (these vary based on debtor’s /creditors bankruptcy petition), Trustee’s fees (based on time costs or percentage of realisation or a fixed fee), the Secretary of the State’s Ad-Valorem fees (based on assets realisation) and the legal and other professional costs incidental in the administration of the bankruptcy estate.

It is believed that Mr Becker intends to make an appeal to set aside the bankruptcy order. If his proposed appeal fails, Mr Becker may explore the possibility of an Individual Voluntary Arrangement, as a mean sof exiting bankruptcy.  If you are in a similar situation like Mr Becker, a timely intervention by our experienced insolvency professionals could assist you either to avoid the bankruptcy proceedings or ways to reduce the Secretary of State’s ad valorem costs( so that you pay less to settle the bankruptcy costs) and or to annual (cancel) your bankruptcy.

Bankruptcy works differently depending on where you live in the UK. If you live in Scotland, the fees and processes are different and it’s sometimes referred to as sequestration (Scottish bankruptcy).

To read more about this case study and the events leading up to it, read our other article about Boris’ bankruptcy.

Failure to seek insolvency advice at an early stage would place you at risk and or an adverse situation/position.

If you would like to know more about annulling your bankruptcy or if you think that you are on the verge of being made bankruptcy by your creditors, please call for a free and confidential advice from one of our professional advisers on 01474532862 or email to stevemarshall@brettsbr.co.uk or rijimon@brettsbr.co.uk.