Posted By: Bretts Business Recovery on 3rd May 2017 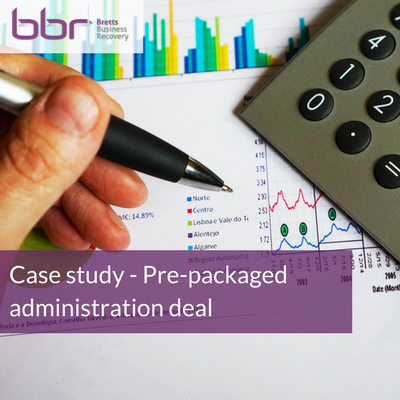 A biochemical firm manufacturing eco-friendly cleaning products with 14 staff has been saved with a pre-packaged administration deal managed by Bretts Business Recovery.

The firm was incorporated in 1996 and was run by a sole Director and shareholder. The firm had built up a considerable business and reputation but had been experiencing some difficult times.

The Director was extremely experienced and knowledgeable in their field but lacked operational and commercial support. Realising the need for an investor that would also bring that additional support and acumen to the Company a search was undertaken and eventually a prospective investor found.

As a result of this protracted process the Company ran out of funds before the deal could be finalised.  Negotiations took place with the key stakeholders of the Company and efforts made to reach time to pay arrangements.  These however were unsuccessful.

The Director, after discussing the various options available with Bretts Business Recovery, chose the pre-packaged administration route which, if successful, would enable the business to be rescued and sold as a going concern.

Although there was already an interested purchaser, insolvency regulations (Statement of Insolvency Practice 16) dictate that the business must be fully marketed for sale to ensure that the maximum sale price is achieved for the benefit of creditors.

Agents were instructed and the marketing activity raised another nine interested parties which lead to two firm offers.

The first offer, offered a lump sum but conditional on agreeing terms of occupation with the landlord of the trading premises. This offer would also secure the jobs of the existing staff.

The second offer was for a lesser lump sum combined with a percentage of the turnover achieved over the next two years. This purchaser would relocate the business and thus staff would have been made redundant.  Whilst this offer may ultimately have received a higher sale price the future turnover of the business could not be guaranteed, there would be an increase in the Administrator’s costs for the extended period required to conclude the deal and also a delay in the creditors receiving their funds.

In consideration of all circumstances the first offer was accepted by the appointed Administrator.

Isobel Brett, Director of Bretts Business Recovery commented “We were very pleased to be able to help rescue this local business and to see the director and staff retain their jobs.  The Statement of Insolvency Practice 16 serves to protect the interests of creditors ensuring that the sale price of a business is maximised to achieve the best return for creditors and that there is no abuse of the administration pre-pack process.  In this instance the business was sold to the original interested investor but only after ensuring that there was no better offer to be found”.