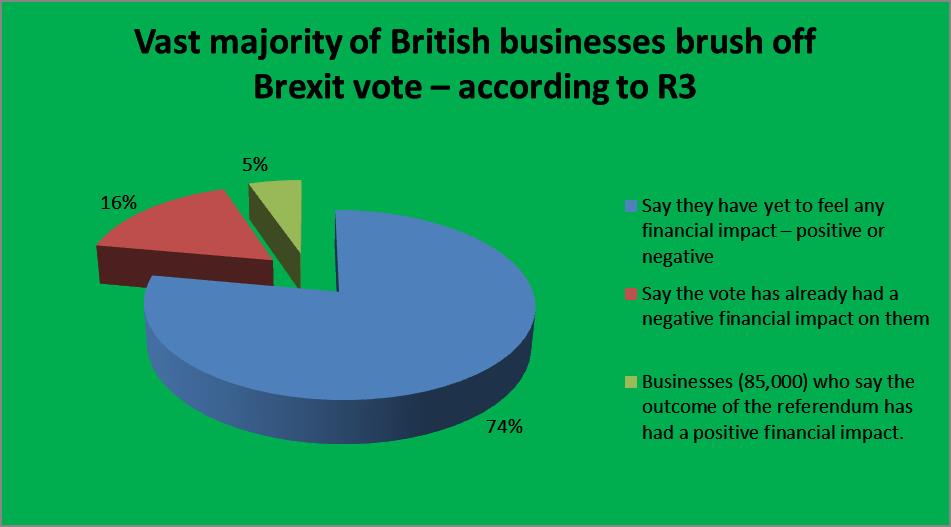 R3 the trade body for insolvency practitioners has conducted a UK business survey which indicated the majority of UK businesses are managing to brush off the effect of the Brexit vote.

Andrew Tate, president of R3, says: “The immediate shock of the referendum result was much briefer than expected, and many businesses – and importantly, consumers – have adopted a business as usual approach since then.”

“The UK is, of course, still a member of the EU, so the impact of the vote itself will be limited for the time being. When we find out what Brexit actually means, things might begin to change.”

“In the short-term at least, there are likely to be one or two instances of ‘Brexit’ being used as a bit of a convenient excuse by companies when they run into trouble.”

The largest group representing 3 in 4 businesses (74%) say they have yet to feel any financial impact – positive or negative – from the 23rd of June vote to leave the EU, according to new research by R3.

The businesses most likely to say they have seen a negative financial impact from the referendum result are large companies employing 251 or more people.

23% of large companies (2,000) say they have seen a negative financial impact from the referendum result, while just 2% say they have experienced a positive impact.

The figures are from a survey of key decision-makers at a representative sample of 500 UK businesses by market research firm BDRC and R3.

Andrew Tate adds: “That said, Brexit will be causing genuine problems for a significant minority of companies, and it will be benefiting others. The main reason for this is the sharp fall in the value of the pound, importers will have been hurt, while exporters may have seen an increase in demand for their products. Uncertainty over the future of the UK-EU relationship may put some important deals on hold, at least temporarily.”

“Anecdotally, while our members say they are yet to see any increase in Brexit-related appointments, some have reported an increase in calls from worried business owners looking for advice.”

“While a number of recent surveys have reported business confidence falling since the vote, that doesn’t appear to have yet translated into a financial impact for most businesses.”

“Larger businesses have much more of a direct exposure to Europe or are much more likely to import materials than the UK’s smaller businesses. They will bear the immediate brunt of any Brexit effect, whether positive or negative.” 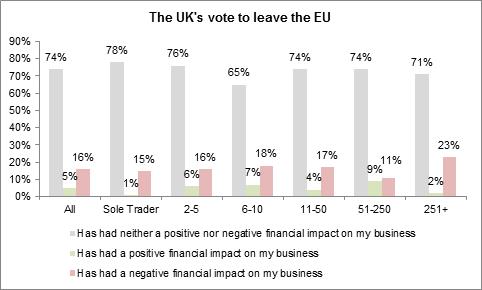 Despite the survey results from R3 The number of business closures have risen since the Brexit vote, according to the Q3 insolvency statistics released by HMRC last week.

Business insolvencies are up by 2.2% and voluntary liquidations are up by 5.5%, showing that more businesses are choosing to close.

This indicates while the survey illustrates a general positive or more accurately an indifferent view following Brexit from UK Businesses, there have been casualties and we suspect it is yet too soon to measure the full impact.