What options are available for your business? 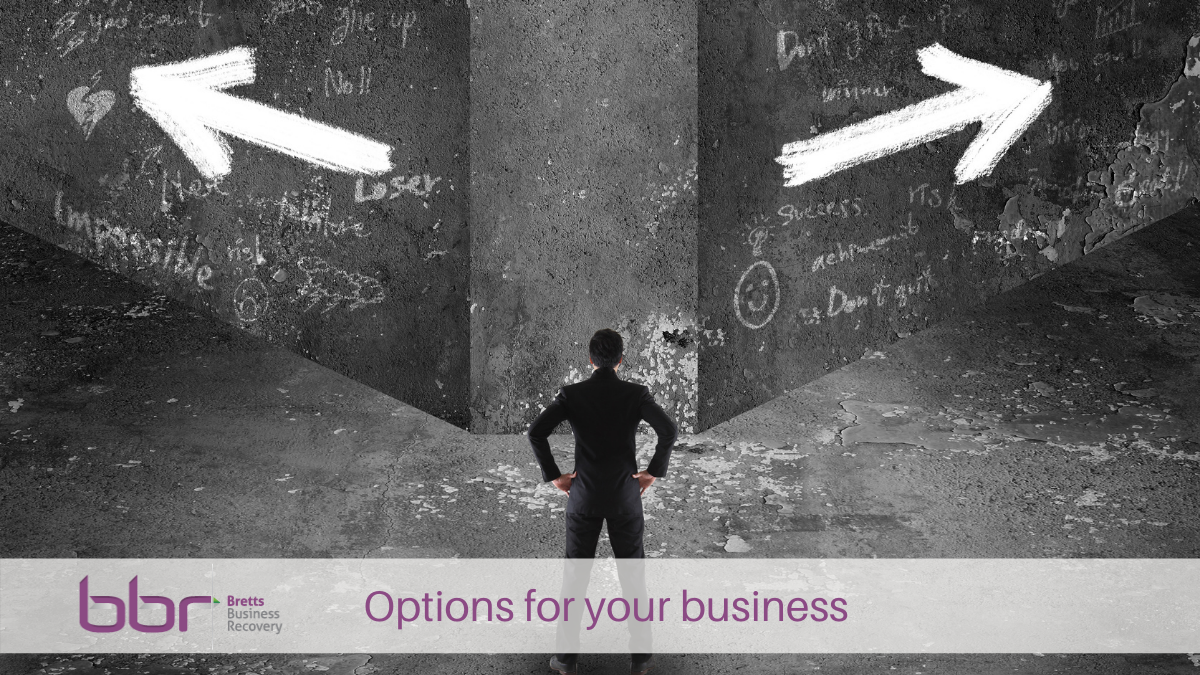 We’ve looked at how to spot signs of financial distress in your business, as well as your duties as a director. Now, let’s look at what the options are for your business.

With this option, time and speed are key: the earlier advice is sought, the more likely it is your business will survive and avoid a formal insolvency process. On a practical level, the steps followed in a restructuring plan are:

Other options  which are known as insolvency processes and are covered by the Insolvency Act 1986 include:

The moratorium is a tool available to distressed companies (both solvent and insolvent), to provide them with a short breathing space, free from creditor action. A ‘monitor’ – required by law to be a licensed insolvency practitioner – oversees the moratorium in order to ensure that it remains likely that the moratorium will result in the rescue of the company as a going concern. The monitor can require the directors of the company to provide information which will help the monitor arrive at a decision about the company’s future viability. The monitor also has a key role to play in overseeing the actions of the company’s directors, and ensuring that their actions do not cause harm to creditors.

property or a regular payment for leased equipment – must continue to be paid, other debts are frozen, and creditors are not able to carry out enforcement actions while the moratorium is in effect. Meanwhile, certain restrictions on the company apply, including that the company may not obtain credit of more than £500 without telling the other party that it is subject to a moratorium.

The moratorium lasts for an initial 20 business days. After that it can be extended in several ways, by up to 12 months, or by even more with the consent of the court.

A Scheme of Arrangement is a court-sanctioned agreement between a company and other parties. Schemes are a flexible and long-established Companies Act procedure. A Scheme can be used in a wide range of circumstances including restructurings, takeovers, and mergers. A Scheme is usually proposed by a company, although administrators may propose a Scheme. A Scheme is a compromise or arrangement between a company and its members or creditors (or any class of them – classes are groups of creditors with similar characteristics). Schemes need to be implemented in accordance with the Companies Act 2006 and involve two court applications: one to convene meetings to approve the Scheme, and one to sanction the Scheme. If approved, the Scheme will be binding on all creditors and shareholders, including those within each class voting against the Scheme

A Creditors Voluntary Liquidation (CVL) is the winding up of an insolvent company. A CVL is initiated by the Directors and Shareholders, who decide the company is insolvent, and pass a resolution to this effect (and also appoint a liquidator).The directors nominate a Licensed Insolvency Practitioner to assist in this process and accept the appointment as Liquidator. These directors pass a resolution that a meeting of the company’s shareholders(known as members) be convened for the purpose of passing resolutions to wind up the Company and appoint a liquidator. The approval of creditors is sought on the appointment of liquidator either by deemed consent or virtual meeting of creditors. At the meeting of members the resolution to wind up the company must be approved by a 75% majority of members voting at the meeting, either in person or represented by proxy. The company ceases to trade and any assets will be realised by the liquidator for the benefit of creditors.

If your business is still solvent but you are still looking to close down and cease trading, an MVL could be the options for you:

A Members’ Voluntary Liquidation is a shareholder-led process and can be a tax efficient way to close a solvent company. It is usually used by shareholders wishing to close their company and withdraw their capital. All creditors of the company are paid in full and any remaining funds are distributed to shareholders.